The magpie-lark (Grallina cyanoleuca), also known as the peewee, peewit or mudlark, is a passerine bird native to Australia, Timor and southern New Guinea. They are known to attack mirrors, windows and other reflective surfaces in which they mistake their reflection for an intruder into their territory.

The male and female both have black and white plumage, though with different patterns.

The magpie-lark is aggressively territorial, and will fearlessly defend its territory against larger species such as magpies, ravens, kookaburras, and even the wedge-tailed eagle. They are also known to attack people to defend their nesting area. Although attacks on people are not as vicious as  plovers and magpies, they can still result in surprise or minor injury to the recipient.

To stop these birds attacking your windows suspend the Hawk under the eve of your home above where the Peewee flies into attack the window. Face the head of the Hawk away from the house. Angle the Hawk slightly into its flight path so that it isn’t just flying towards a flat piece of plastic.

You can suspend the hawk by following the installation directions for “Verandah”. Once the hawk is in position you should obtain instant results. If the Peewee comes in at another location just move the hawk to that spot.

You have everything to gain by ordering now. You may need a number of Hawks to solve your bird problems. One Hawk is $39.00 plus packing and postage of $9.00 a total of just $48.00. However if you purchase 2 or more Hawks then we would pay the freight. That means that the Hawks would cost you just $39.00 each.

Click the links below to read more about a specific problem bird or problem area. 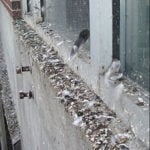 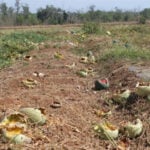